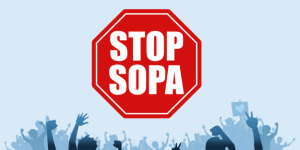 United States H.R.3261 AKA the Stop Online Piracy Act (SOPA), an ill-conceived lobbyist-driven piece of legislation that is technically impossible to enforce, cripplingly burdensome to support, and would, without hyperbole, destroy the internet as we know it.

The bill is supporters include Hollywood, media firms, the U.S. Chamber of Commerce, and their lobbyists, who have spent over $91 million to push this new law through.

If passed, SOPA will allow corporations to block the domains of websites that are “capable of” or “seem to encourage” copyright infringement. Once a domain is blocked, nobody can access it, unless they’ve memorized the I.P. address.

SOPA would likely do little to achieve their explicit goals of curbing online piracy. They would give corporations and the US government broad powers to censor the Internet, while at the same time making the entire Web less secure.

What you can do: